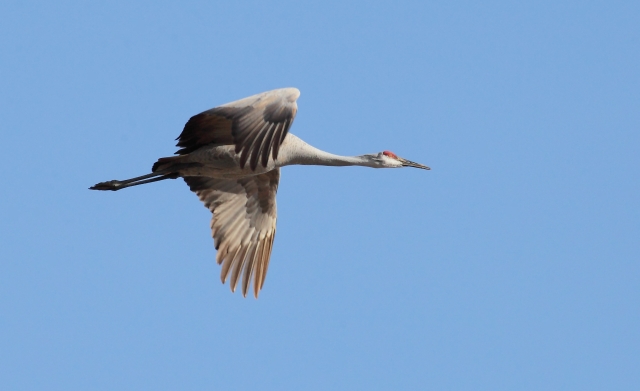 The first official Kentucky season on Sandhill Cranes ended January 10, 2016 with a total of 75 cranes killed. The following is the breakdown by County: Hardin Co. – 41, Barren River Lake area – 30, Simpson Co. – 2 and LaRue County – 2. And, while there were Whooping Cranes in the state during the season there were no known mishaps in identification.

Barren River Lake is possibly the largest staging area for Sandhills in Kentucky. Of the 92 Sandhill Cranes killed this season, the Barren River Lake area lead in kills (three birds on the WMA with the rest on private land). Ironically, it is also the setting for the only organized Sandhill Crane-viewing in Kentucky, sponsored by the Kentucky State Department of Parks – Nature Watch Weekends, Jan. 25-27 and Feb. 8-10, 2013. 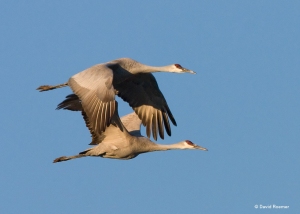 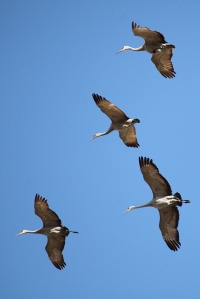 Saturday, December 15, 2012 marked the beginning of the second in a three-year experimental Sandhill Crane season in Kentucky. The season will run until January 13, 2013 or until 400 Sandhills are killed, whichever comes first, when the season will be closed.

Earlier this year the Kentucky Department of Fish and Wildlife Resources held a series of nine Town Hall meetings across the state. As was the case last year, the public was encouraged to share its concerns with Commissioner Jon Gassett and the District Commissioners in a public forum. As of this post, the KDFWR had not yet posted its responses to the Town Hall meeting questions and comments.

There was a question from a hunter in the audience asking about the quota being raised if permits are purchased but not used to kill cranes. Commissioner Gasset: “You know, we will keep an eye on it and make sure we adjust appropriately. Raising the limit, it is an experimental season with the Feds right now. It’s a three-year season, so we have to be very careful about what we change on that. We can change how we do the drawing, but we have to be careful about how, you know, as far as changing limits, season lengths or that sort of thing.”

Commissioner Gassett’s response is telling as it indicates the Department is prematurely considering the possibility both of raising the quota and increasing the length of the Kentucky season. But, according to USFWS’s Eastern Population Management Plan, decisions such as these are based on an overview of the entire eastern population across the Mississippi and Atlantic Flyways. What happens to the population in one state affects the entire population.

Kentucky’s first 30-day hunting season on Sandhills ended Sunday, January 15. It should not be a surprise that the two counties – Barren Co. (Barren River) and Hardin Co. (Cecilia) – with the highest numbers killed, are the main staging areas for cranes in Kentucky. Both these areas have suitable habitat – agricultural fields, mudflats, shallow lakes and ponds – for Sandhills to find food and roosting sites during their migration.

In the recent past, thousands of Sandhill Cranes could be viewed at any given time from roads in the area as they fed and especially at dusk when they dropped in to roost. However, with the start of the season, long-time roosting sites were abandoned for other sites and the now wary Sandhills fly whenever approaching cars slow to watch them. It will be interesting to see how this impacts the upcoming Barren River State Park crane viewing weekends.

For the first time in almost a century in the eastern U.S., Sandhill Cranes will begin falling dead from the sky Saturday, December 17, 2011. Regarded as a victory by the Kentucky Department of Fish and Wildlife Resources over the thousands of individuals in Kentucky and other eastern states who expressed concern and opposition to this new season it will, in Commissioner Gassett’s words, provide Kentucky with yet another “hunter opportunity.”  And, since this eastern population of Sandhill Cranes has not been under fire in its collective memory, the hunt should prove to be like shooting fish in a barrel – providing true sport for the lucky 332 hunters drawn in the inaugural lottery.  May the Sandhills fly high and overfly Kentucky!

KDFWR Season Details
The experimental hunting season for sandhill cranes in Kentucky will begin Saturday, December 17th, 2011 and continue until January 15th, 2012 or until the harvest of 400 sandhill cranes.  The season will be a statewide season which would allow the harvest of a maximum of 400 sandhill cranes in Kentucky.  The hunt will occur from sunrise to sunset each day.  Hunters will be required to use shotguns with USFWS approved non-toxic shot to hunt cranes in Kentucky.  Successful hunters will be required to Telecheck harvested cranes the day of harvest.   An area closed to sandhill crane hunting will exist at Barren River Lake.  Sandhill crane hunting shall be prohibited within 100 yards of the normal summer pool level of 552 feet in the following embayments  of Barren River Lake: Beaver Creek; Peters Creek; and Skaggs Creek.

Application
Persons interested in hunting sandhill cranes must have a sandhill crane permit to hunt sandhill cranes in Kentucky.  To obtain a permit, interested hunters must apply for a permit via the KDFWR Online License and Permit Agent between November 15th, 2011 and November 30th, 2011.  Applicants must possess a valid Kentucky hunting license or be license exempt pursuant to KRS 150.170 before applying.  Application via the online agent will cost applicants $3.00.  Applications will be accepted from both Resident and Non-Resident hunters.

Drawing
The 400 permit holders will be randomly selected from all applicants via a randomized Electronic Drawing.  This drawing will occur on or before December 5th, 2011 and successful applicants will be notified immediately on the KDFWR website.  A Sandhill Crane Hunt web page will allow applicants to enter their name and Social Security number to see if they have been successfully drawn.

Telecheck
Each sandhill crane harvest must be reported via Telecheck by midnight the day of harvest.  The Telecheck confirmation number will serve as permission to possess that crane.  {CONCERN: If hunters wait until late in the day to report via Telecheck isn’t there the possibility that more than 400 Sandhills will be killed?}

Monitoring
Each hunter MUST check the KDFWR website daily for notice of season closure.  While 800 tags will be mailed to permit holders, the season will close if harvest reaches 400 cranes.  If this harvest limit is reached, KDFWR will immediately notify hunters via the KDFWR website.  KDFWR will also post notices to warn hunters of the presence of whooping cranes in Kentucky. {CONCERN: If hunters wait until late in the day to check the KDFWR website for notice of season closure isn’t there the possibility more than 400 Sandhills will be killed? If hunters are in the field how will they read the KDFWR posts of the presence of Whooping Cranes? What will be done about the inevitable poaching of Sandhill Cranes after the limit of 400 is met (as they were already being poached in Cecilia KY this spring before the possibility of a season was even announced)?}

Post Season Requirements:
All permit holders must complete an end of season survey.  Anyone not completing this survey would not be eligible to apply for future hunts.

“… In 2009 and 2010, approximately one in five nests fledged a chick to migration. Given this 18% fledging to migration rate, a harvest and crippling removal of 480 birds would require 2,800 nests to replace the hunting loss…for Sandhill Cranes that migrate through Kentucky…”

To read the entire report from the International Crane Foundation, please click here.

Read the International Crane Foundation’s May 25, 2011 clarification of points made in Kentucky assessment as requested by KDFWR.

Read the International Crane Foundation’s analysis of June 2, 2011 presentation by KDFWR to the Legislative Research Committee.

The International Crane Foundation (ICF), Kentucky Resources Council (KRC), several other non-governmental organizations; 337 individuals from Alaska, California, Colorado, Connecticut, Florida, Illinois, Indiana, Kentucky, Massachusetts, Missouri, Ohio, Pennsylvania, Tennessee, Virginia, Washington, and Wisconsin; and several petitions containing signatures from over 3,000 people expressed both general and specific concerns about the scientific uncertainty of the Kentucky proposal, the EP Sandhill Crane Management Plan, and the potential taking of whooping cranes. All expressed opposition to the establishment of a new sandhill crane season in Kentucky. According to Alicia King, a spokeswoman for the U.S. Fish and Wildlife Service there were no letters that supported the hunt.

Leave a Reply to Phyllis B. Ladd Cancel reply