4th Wheeler NWR Festival of the Cranes a success

This year, approximately 4,500 individuals attended the 4th annual Wheeler NWR Festival of the Cranes, in Decatur, Alabama the weekend of January 9th – 10th, 2016. 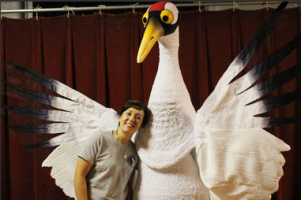 What easier way to learn about North America’s rarest and tallest bird then at the Wheeler Festival of Cranes? Organizers offered a wide variety of events and programs that included art exhibits, sunrise breakfast at the Refuge, nature walks, children’s activities, painting and nature photography lessons, learning how to dance like a crane, a film premiere about the life of Rachel Carson, a keynote presentation by George Archibald, co-founder of the International Crane Foundation (ICF), guest appearances by President Theodore Roosevelt (portrayed by Joe Wiegand); Auburn University’s Southeastern Raptor Center presentations and the opportunity to meet ICF’s “Hope,” a 7-foot tall Whooping Crane “Muppet.”

For many, however, the most exciting part of the weekend was getting to observe 5 Whooping Cranes that stayed within sight of the refuge observation building the entire weekend.  It was a great festival so mark your calendars for next year!

Wheeler National Wildlife Refuge, located along the Tennessee River between Huntsville and Decatur, was established in 1938 to provide habitat for wintering and migrating birds. Considered the easternmost Refuge in the Mississippi flyway, this 35,000-acre Refuge attracts thousands of wintering waterfowl each year.

The Refuge is made up of a wide diversity of habitat types such as bottomland hardwoods, wetlands, pine uplands, agricultural fields, and backwater embayments. This varied habitat provides excellent feeding, loafing, and roosting sites for waterfowl, as well as nesting sites for migrating songbirds.

In January of 2006, two Whoopers from one of the Operation Migration cohorts were discovered on Wheeler NWR.  Since then, Whooping Cranes have wintered there each year. During the winter of 2012-2013, up to 12 Whoopers spent a portion of their winter on the refuge. In recent years, they have frequented areas around the visitor center and wildlife observation building, allowing thousands of refuge visitors the opportunity to view them and learn their amazing story.

The International Crane Foundation (ICF) works to protect Whooping Cranes from threats like fresh water shortages, wetland destruction, power line collisions, illegal shootings, and more.  According to ICF’s Lizzie Condon, Keeping Whooping Cranes Safe Coordinator, last winter, a total of 36 whooping cranes were spotted in Alabama before the birds began their northward migration in March and April. This year she hopes the total will be more than 40. Simply by attending the Wheeler NWR Festival of the Cranes, an individual helps protect Whooping Cranes by showing their support for the cranes in the north Alabama region.

“I think Alabama’s really lucky in that you do have a very good public viewing site for Whooping Cranes,” said Condon.  “In Texas people pay to take boats to go see them, but here you can just roll into the parking lot at Wheeler and there they are.” 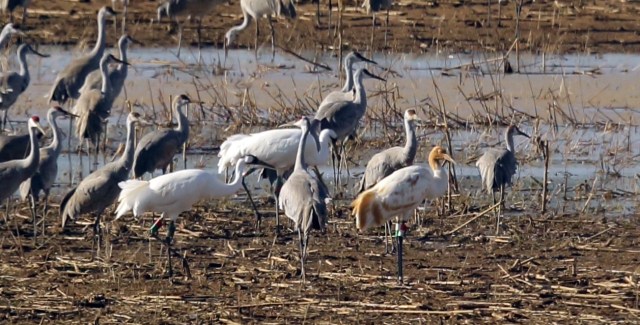 Who were those Whoopers attending the Festival?

During this year’s festival five Whooping Cranes, among thousands of Sandhill Cranes, were visible at any given time from the wildlife observation building. Refuge staff are able to identify the individual Whoopers by the color-coded bands on both legs – color combinations unique to each crane. 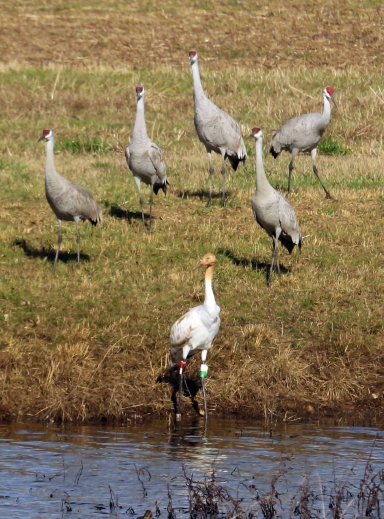 The five Whooping Cranes seen during the festival represented three different programs used in the reintroduction of the Eastern Migratory Population of Whooping Cranes:

Direct Autumn Release (DAR) program: In the fall, captive-born chicks are released on Horicon National Wildlife Refuge in the company of older cranes from whom the young birds will hopefully learn the migration route.

Parent-reared (PR) program: Captive-born chicks are each released near a wild crane pair in hopes the pair will “adopt” the chick and lead it on migration. This part of the Whooping Crane reintroduction program began in 2013.

To learn more about Whooping Cranes, join in protecting them, and take the “I Give a Whoop” pledge please visit www.savingcranes.org.

To learn the life story of each Whooping Crane in the eastern migratory population click here: http://www.learner.org/jnorth/tm/crane/SurvivalResearch.html