Last week members of the Whooping Crane Eastern Partnership, including Operation Migration, met with USFWS representatives to discuss the future of the Eastern Migratory Population (EMP) of Whooping Cranes. After all was said and done it was decided that there would be no more aircraft led releases. 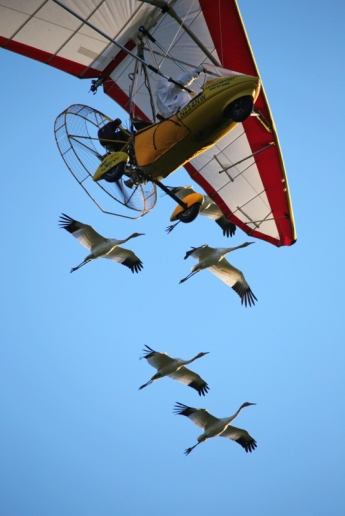 “…There are a number of inhibitors to a successful reintroduction of Whooping cranes. Firstly, you need a method of teaching them migration. Then you must get enough of them onto the landscape so a high percentage will survive to reach breeding age. You must ensure they exhibit wild behavior and mate with their own kind.

Operation Migration team has been very successful in achieving those goals. In fact, the Ultralight led method we pioneered comes closer than any other technique yet developed. It provides the highest survival rate, greater pairing and the only fledged chicks produced in the Eastern Migratory Population.

Despite those achievements, you can only judge the success of a wildlife reintroduction by fecundity or the ability for the population to produce young and grow to a self-sustaining level.  Of the 240 plus birds released into the EMP, only ten chicks have survived to fledge. We have taken pride in the fact that all of those successes have been the result of UL pairs, but it’s a long ways from sustainability.”

– Joe Duff, from Operation Migration’s announcement of the end of the ultralight guided releases

The Kentucky Coalition for Sandhill Cranes wishes to join all other “craniacs” in saying a huge “thank you” to Operation Migration for its fifteen years of tireless work towards bringing the Whooping Crane back to the eastern United States. When this experiment began, who could have predicted that the sight of an ultralight followed unwaveringly (for the most part) by a line of young cranes would capture the hearts of so many?  We wish the entire Operation Migration team well, not only now but in their future work with our Whooping Cranes.