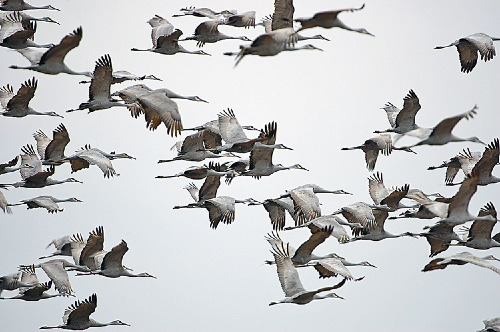 According to a source at the Tennessee Wildlife Resources Agency (TWRA), the Mississippi Flyway Council met in late August where they voted on and submitted recommendations to USFWS regarding frameworks for the 2017-18 hunting seasons and bag limits, based on this year’s population and harvest data.  The recommendations also included a request for operational status of Tennessee’s Sandhill Crane hunting season (now entering its fourth  year “experimental” season). The Service Regulation Committee considers the  Flyways recommendations and will publish a set of proposed frameworks in the Federal Register. At that time, the USFWS will accept public comment on the proposed frameworks.  Shortly after the comment period, they will make any necessary adjustments to the frameworks and then finalize them.  These become the overall set of “rules” under which each state can establish their hunting seasons.

The deadline for your comments to TWRA is November 15, 2016.

The following is the TWRA press release:

“The Tennessee Wildlife Resources Agency is soliciting comments for its 2017-18 waterfowl and other migratory bird hunting regulations, including sandhill cranes. This is an opportunity for the public to provide ideas and share concerns about hunting regulations with TWRA staff. The comment period is open Oct. 15-Nov. 15, 2016.

Due to recent changes in the timing of the federal regulation process, waterfowl and other migratory game bird hunting seasons are now proposed to the Tennessee Fish and Wildlife Commission at its January meeting and voted upon at its February meeting.

Public comments will be considered by TWRA’s Wildlife Division staff and may be presented as proposals for regulation changes. Comments may be submitted by mail to: 2017-18 Hunting Season Comments, TWRA, Wildlife and Forestry Division, P.O. Box 40747, Nashville, TN 37204 or emailed to twra.comment@tn.gov. Please include “Waterfowl Season Comments” on the subject line of emailed submissions.”

Additional information: The number of permits issued for 2017-2018 TN hunting season remains the same as the 2015-2016 season, 400 permits – 3 cranes per permit. However, the 2016-2017 season has been extended from 28 days to 53 days. The hunt zone also remains in  southeastern Tennessee – South of Interstate 40 and east of State Highway 56. Hiwassee Wildlife Refuge is within this zone. The hunt will be stopped only for the weekend of the annual Sandhill Crane Festival. With the issuance of the new rules there is the distinct possibility that the  hunt will be extended statewide, with an increase in both the number of permits issued and the number of cranes allowed to be killed.